You are here: Home / crafty / need some spare hours, anyone want to share?

ok.. so i am behind in my july posts again.. and instead of making a zillion excuses i just wanted to explain….

when i originally planned this i thought the store was closing at the end of august.. and then we realized it wasnt… but i didnt want to cancel this fabulous idea… soooo squeezing all my classes from august into july… interviewing for jobs…. working…. working….. working…… i have gotten behind… but promise to catch up…. SOON!?

i wanted to share with you the posts from my friends though… since they ARE on task…
you can still continue to bid… and i will be back with my creations on monday.. deal? ok deal.

july 16th: glenda is one of my crafty friends from canada… 🙂 she also celebrated a birthday on the 16th….  "The theme is summer/ocean. I love summer – the sun, being outside, hanging with friends. I love the ocean just as much – the sound of it, the look of it, the creatures that live in it, the beach that it crashes on to, all the great stamps that are created about it (hee, hee). So an ocean themed card it was to be… but which stamps to use (I have several…surprise, surprise)? I decided to dust off some older ones and pair them with one of my favourite colour combinations…." pop on over to her blog.. she IS donating this card!!!

july 17th: melyssa with a y… is one of my bestest friends.. one of my chosen family.. she and i met in college… and cant get rid of her yet 😛 I was so excited when i asked my girls aka chosen family to participate… all of them said yes! it makes me laugh a lil because i'm pretty sure it is my fault that most of them are crafty 😉 … anyways this is what melyssa has to say about her project…. ( and YES it is being donated) "Just like my Jenny I am a beach girl through & through… all though I might use a little higher spf then her when we hit the beach;) beaching it with Jenny and Josie is one of my all time favorite summer activities! We just don't get to do it enough!! When she sent out an email asking everyone to contribute to her beach themed craftiness for the month of July I couldn't say no. So I decided to do a simple canvas … " head on over to her blog…. and you will also get a glimpse of my most adorable nephews!!! i just love them to pieces…

july 18th: now we have josie…. my other roomate from college, also one of my bestest friends AND chosen family…. i went into room draw sophomore year.. cause me and my oldest friend loved each other, just couldn't live together 😉 …. and i got stuck with jos, or she got suck with me… either way i don't care.. and i believe everything happens for a reason 🙂  here is what josie had to say about her project:
" When Jenn asked me if I wanted to take part in her beach-y themed project – I was thrilled!  Not only because it gave me a reason to actually have to bust out my crafty stuff and make something, but also because I had just the project in mind that I wanted to make for her.  Since I met Jenn in college, I can't say that we have grown up going to the beach together – but I CAN say that we figured out pretty quickly that it was a favorite place of both of ours!

Back in the day, we would hit the lake beaches – we would pack the traditional salad packed pita with dressing, put on the lowest SPF lotion possible, soak in the sun and then pretend to read when really we were talking about all of the weird people on the beach! (This would also be where Jenn was hit on by a couple 13-year-olds who asked her if she wanted to play Frisbee – I can't forget that!)

We have also been to many ocean beaches – It all began with Old Orchard Beach in Maine.  We jumped in the Hyundai Elantra wagon, hit the beach for the day, and rented a hotel room to do it all over again the next day.  This led to my having to call in to work telling a tiny white lie about how my car wouldn't start and that this nice guy on the beach had a friend nearby who could tow it, fix it and return it… AND, clearly, I would not be in for work.  (Ok, maybe that is a bit more than a tiny white lie, but when you hang out with Jenn on the beach – these things COULD happen!)

Before long, our Stinka Girl (AKA Melyssa Marland) joined in on the fun.  The three of us have had many a great beach days together – each taking the others to some of our favorite spots – from Craigville Beach, to Plum Island, to my favorite, Drake's Island.  Our love of the beach has forced us to have matching Vera Bradley beach bags, a supply of Burt's Bees, the famous Beach Brew, and let's not forget the variety of sunscreens and tanning lotions!

I love, love, love my girlies – and wish we had more time to spend together giggling about things we are reading, memories of the 'good ol' days', people around us and at each other! Hehehe That Melyssa – she iis the silliest girl ever! Between not being able to hear the little jokes we are telling to wondering why SHE doesn't have matching suntan lotion – we are practically in tears with the silliness!

So, why do I think of my girlies when I think of the beach?  Because many of my BEST memories have been with them… on the beach.

xooxo I love you girls 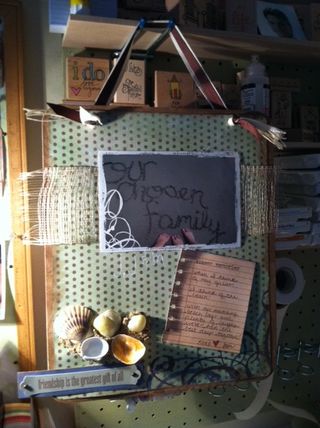 OK, next…   I love that Jenn has taken this beach-y blog a step further and is using it as a way to raise money to help a family cope during a time of need.  I absolutely wanted to add to the auction, but knew that my project had a totally different destination!  So, I figured I would put in something that I made, and love – and would be perfect for this auction!  When visiting Jenn, I was lucky enough to take a class taught by Cheryl Mezzetti where we created an amazing beach book.  It is colorful, creative, and so Cheryl!  I have been holding onto it for the perfect pictures… but want to donate it in hopes that it will be one more thing that a bidder will love and want to donate more for! 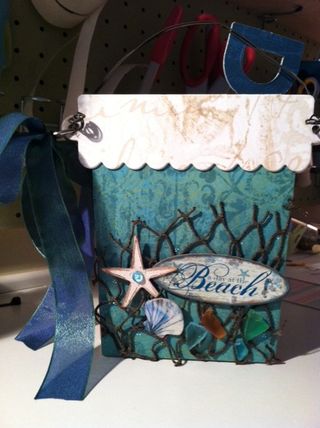 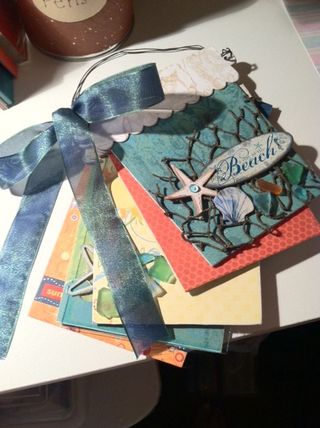 I will be back on monday with more goodies from my friends.. and catch up from me :)) thank you for understanding… and remember you can still bid here