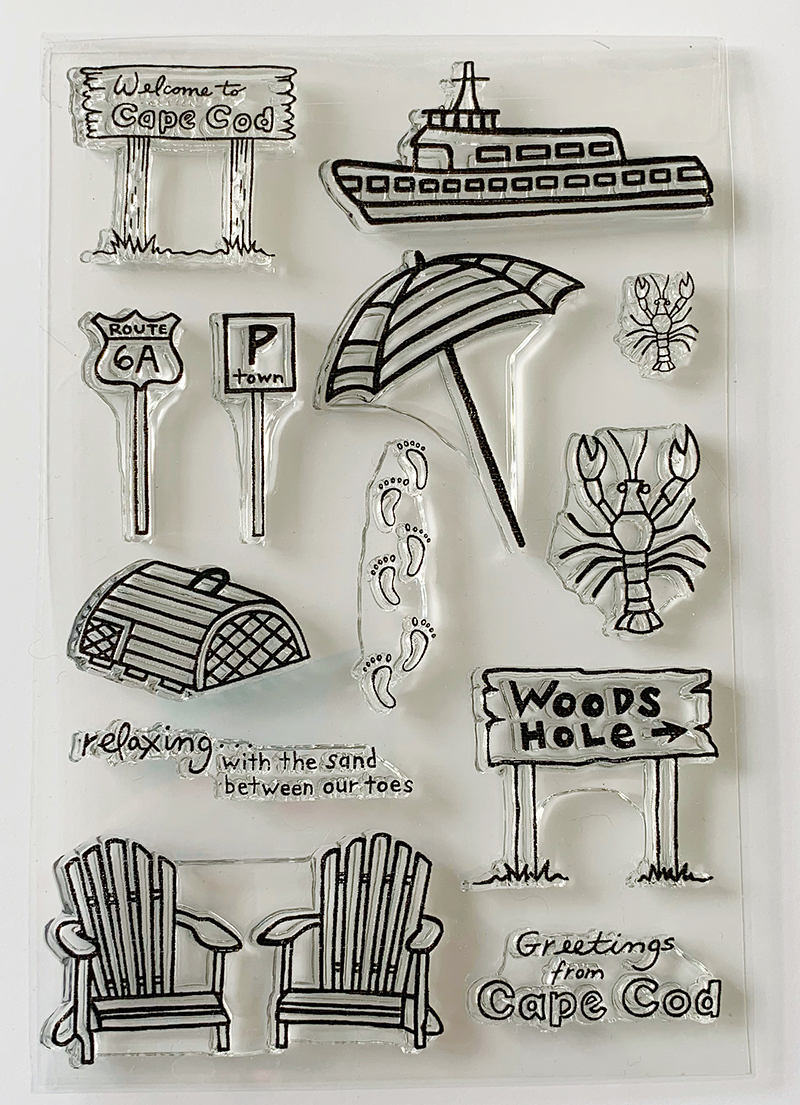 This exclusive 4″ x 6″ clear stamp set is only available here at shurkus.com . It is a perfect set for anyone that holds Cape Cod in their hearts. Many of the images will work on other nautical creations as well.

Made in the USA, shipped from Cape Cod 😉

You can see a TON of inspiration here

A little bit of information about the stamps and their meaning:

Cape Cod: is a geographic cape extending into the Atlantic Ocean from the southeastern corner of mainland Massachusetts, in the northeastern United States. Its historic, maritime character and ample beaches attract heavy tourism during the summer months. Since 1914, most of Cape Cod has been separated from the mainland by the Cape Cod Canal. The canal cuts 7 miles roughly across the base of the peninsula. Two highway bridges cross the Cape Cod Canal.

Route 6a: is Cape Cod’s most historic and scenic highway. It follows along Cape Cod bay and passes some of the most historic buildings and places on Cape Cod

Ptown: is what locals call Provincetown. Provincetown is located at the most extreme tip of Cape Cod, with only 3,000 year-round residents, but it explodes to 60,000 in the summer! Ptown is only 17.5 square miles!

Woods Hole: is at the most extreme southwest corner of Cape Cod near Martha’s Vineyard and the Elizabeth Islands. It is the site of several famous marine science institutions, including Woods Hole Oceanographic Institution, the Marine Biological Laboratory, the Woods Hole Research Center, NOAA’s Northeast Fisheries Science Center (which started the Woods Hole scientific community in 1871), the Woods Hole Science Aquarium, a USGS coastal and marine geology center, and the home campus of the Sea Education Association. It is also the site of the United States Coast Guard Sector Southeastern New England (formerly USCG Group Woods Hole), the Nobska Light lighthouse, and the terminus of the Steamship Authority ferry route between Cape Cod and the island of Martha’s Vineyard.

Ferry: there are several ferries operating on Cape Cod. Passenger ferries, high-speed ferries, etc to transport from Cape Cod to the Islands (Marthas Vineyard and Nantucket)

Lobster Trap and Lobsters: On Cape Cod, we call them “Lobsta”.  New England has some of the yummiest and freshest seafood, Lobster is just one of those items. You can find Lobster Mac & Cheese, Lobster Ice Cream, Lobster Ravioli, Lobster Rolls, and more!

Adirondack Chairs: These are usually made out of wood, and with the low deep seat it forces you to relax. You can find them all over Cape Cod at hotels, restaurants, and in people’s yards.

Footprints in the sand: Cape Cod’s beaches are considered among the best in the world, especially those along the Cape Cod National Seashore, a 40-mile stretch of unspoiled sandy beach in Outer Cape Cod. With 559.6 miles of coastline, Cape Cod offers many beautiful sandy beaches for you to enjoy.

There are no reviews yet.